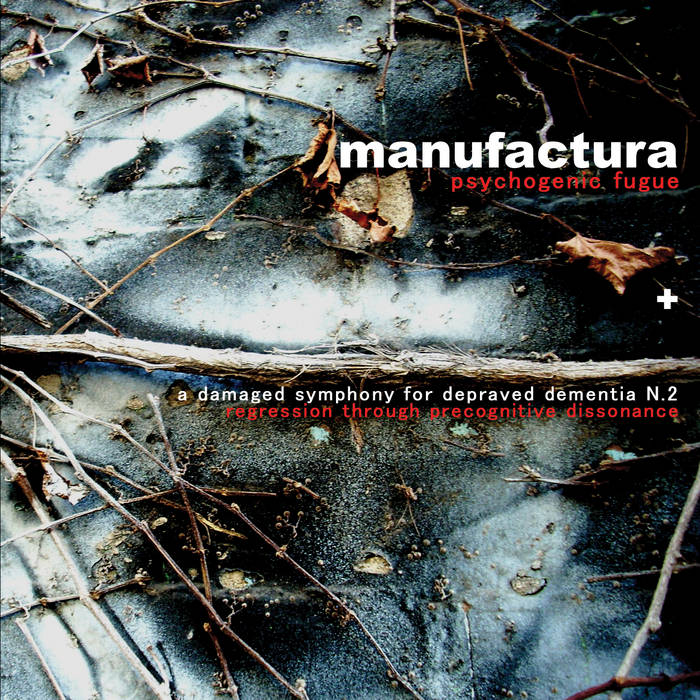 Kekoa_TCO Very dark and hard hitting songs, if you like rhythmic noise with vocals, this is a must buy. I would recommend this to anyone who likes W.A.S.T.E.,

When a series of traumatic events come to ahead, certain individuals transform themselves into something entirely different from what they were. All reason, perception and awareness of what is real, seize to be within the self. A state of delusion overcomes; beliefs and ideas are severely altered. History and memories are replaced with events that might have never taken place. Name, appearance and personality are distorted to correlate with the corrosion of the self. Relocation and sudden travel to another city or another life are commonplace. Lastly and perhaps, the most destructive and devastating aspect of this affliction inevitably comes to sharp excruciating focus. The condition and all of its aspects don't exist, they are not real. Conceivably all of this too, was just a figment of a disturbed mind. Here now is a collection of recorded events during such an instance. Where madness consumes and dissolves our conscience, our convictions and the consequence incurred by all of this. A glimpse into a world that quite possibly is just around the corner, awaiting each and every one of us.

After many highly acclaimed and successful releases, Manufactura returns with what can only be considered as its most ambitious album release to date, "Psychogenic Fugue". Once again Karloz.M takes a myriad of musical genres, destroys all of them and makes a new, sometimes shocking, sometimes soothing, and always brooding yet powerful, distinctive and very difficult to describe style of his own. Implementing a more vocal experimentation with various styles that are both haunting and deep-felt, it certainly holds many surprises for the listener. Fusing new sounds and noises with raw, violent, quiet and emotional concepts almost seamlessly has now become a Manufactura trademark and masterfully displayed on this release. The sheer size, scope and reach of this uninhibited work of art, makes it Manufactura's most endearing and accessible as well. A long time staple in many dance club, experimental & electronic music play lists from DJ's around the world, Manufactura now expands to a wider multitude of various tastes.

To commemorate 10 years of Manufactura since the inception of recorded material, to express gratitude and to appease its most ferocious fans, a second disc titled "A Damaged Symphony for Depraved Dementia N.2: Regression through Precognitive Dissonance" will be available along with the new album as a limited edition double album. Only 1,000 copies of this double disc will be made available with complete and exclusive artwork, lyrics, photography and design, all specifically created by Karloz.M himself. The second disc should be considered as entirely NEW material, it is a complete reworking, production and redesign of several tracks featured on the first 2 albums released by Manufactura, which are now both out of print. These new versions of the now classic material can be described as "fraternal twins" of the originals, the other side of the coins. Diehard fans can rest assured to be pleased and surprised by these new interpretations and brand new material from this electro-industrial project many now consider a legend in the field.

If you like Psychogenic Fugue + A Damaged Symphony For Depraved Dementia N.2 (CRUNCH056), you may also like: